After a serious accident whilst learning to drive a car, Rebecca had no road confidence. After 6 months on a Wheels to Work Moped; she has regained her self-assurance and found independence . 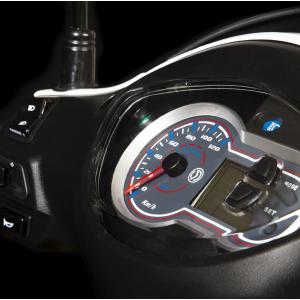 Rebecca was offered a new job as a customer service agent just 3 miles from her home. Unfortunately, she discovered that because it’s located on an industrial site away from the city, she had to catch 3 buses to get her to work on time. This wouldn’t include the travelling after work to collect her daughter from school, meaning she’d also have to finish work early.

Rebecca had once started her driving lessons but, soon before her test was due, she was in a serious accident with her family in the car leaving them upturned. Her fears from the accident prevented her from wanting to start her lessons again.

Discussing her travel options with her family, Rebecca mentioned getting a moped to her father-in-law who’s a keen motorcyclist from Birmingham. He advised her to look into Wheels to Work to see how she gets along with a moped as she hadn’t yet been paid to afford the training, equipment and a safe second-hand moped of her own.

Rebecca has now come to the end of her first 6 month period and decided to prolong her loan for a further 6 months. Project Officer Natalie met with Rebecca to find out how she was finding the loan experience and if she had any suggestions for the project.

“…The project has been so good I wouldn’t change a thing, it’s so good I’ve recommended that my son gets one too! He’s been able to apply for a job at the same place as me knowing that he’ll be able to get there.

I’ve had a promotion too to a supervisor! I’m able to work the day, leave to collect my daughter from school and return after I drop her at a sitter I’m flexible for their shifts, I wouldn’t have been able to do that relying on buses. The buses are different companies too so I’d have to get separate tickets, it would have cost a fortune.

I’m a lot more independent now that I have the bike, the car accident knocked me loads but the moped has built my confidence, road awareness and I do feel like I have better chances at things in life now too. I’m going to try and start my driving lessons again and hopefully at the end of this 6 months I won’t need the moped anymore.”

Rebecca’s son is also going through the application process and will hopefully have a moped within a couple of weeks.

Fill out the short form online to start your application

Ways we can help

New, reconditioned and electric. Get fit and get there faster.